In 2005 the City experienced a rain event which caused considerable flooding.  This event spurred the call for drainage improvements.  From this event, a priority list of projects was developed, with the intent of funding through grants.  To make the City’s grant applications more appealing to funding agencies, a Stormwater Utility concept was promoted.

The original intent of the Stormwater Utility was to provide a dedicated source of funds separate from the General Fund and not subject to diversion to other activities than storm water.

The fee was to pay for operations and maintenance of the existing and future drainage facilities in the City.   The utility was developed with the explicit direction of a maintenance budget only, and did not include any funding of capital projects, which were to be funded by grants and available cash reserves for the minimal matching funds expected.

Available grant funding at the inception of the utility was substantial and required little in the way of matching funds from the grantee.   The economics of the nation have changed, and 50% matches are now the most common in awarded grants.  Additionally, having projects designed and permitted, ready to be bid and constructed is also preferred by grant supporting agencies.   For this reason, improvements needed for the drainage issues in Gulf Breeze will require an identified method of funding.

The City chose to fund this match from reserved cash, but leave a debt owed to the General Fund by the Stormwater Utility.   The utility has never had a positive cash balance since its inception in 2006.  The most recent large project of $2.5 million was funded by a $1.5 million grant, with the remainder funded with a borrowing.   The debt services for the borrowing was placed in the Stormwater Utility in 2017, but no adjustments in revenue have been made fund the payments.

In addition to the past grant projects, an additional $3.3 million in drainage projects have been recognized by the City Council as needed improvements.  While grant opportunities are being explored for each project, the City Council recognizes the need to prepare funding the required matches if grants are approved and funding for the entire project if no outside funding is available.

The available sources of revenue beyond grant funding include General Fund reserve cash, special assessments for project contributors, and increasing the Stormwater Utility Fee to include capital contributions.  Each off these have differing impacts to the City.  General Fund reserves include tax revenue which is acceptable for these projects, but would limit the availability for other programs with no income sources.  Special assessments are appropriate as the burden of cost is spread among those who contribute to the problem and/or benefit from improvements.  But the City Council has set a policy to require a majority consent to a special assessment prior to approval.  As it can be difficult for many who do not flood to understand their contribution to the flooding problem, obtaining majority consent will be difficult in all cases.

Increasing utility rates to include capital improvement is a standard practice for almost all utilities, stormwater or another utility service.

Utilities are treated as business enterprises totally responsible for their own operation, maintenance and growth.  Using the rate increase to fund all improvements might meet some opposition from those who take the stance that they should not pay when they have no problem.   However, the City has taken the stance in the past where some improvements to one area are considered a benefit to all.   Examples include neighborhood parks enjoyed by all citizens, or increased fire protection for certain areas lowering insurance rates for all.   Improvements to the drainage system will provide these types of benefits direct and indirect, and thus the cost burden should be shared by all.

As discussed in the Stormwater Utility Fee Discussion for FY 2018 Budget, if the City were to increase the utility fee to fund capital projects, the following are possible levels of funding and the corresponding rate. 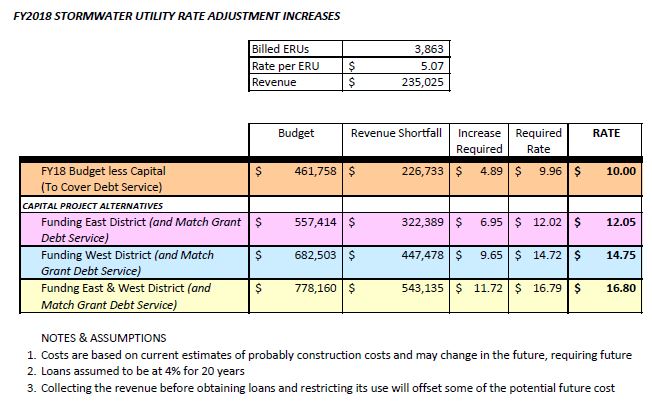